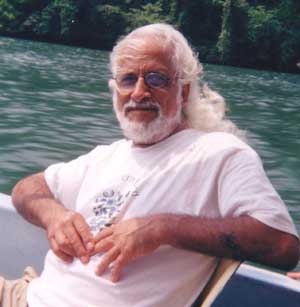 Bob Makransky is a systems analyst, computer programmer, and professional astrologer. For the past 35 years he has lived on a farm in highland Guatemala, where he studied Mayan astrology and shamanism with his teacher don Abel Yat Saquib until don Abel's death in 2009.

Bob became interested in magic at Micky Russo's Spiritualist Church in San Francisco in the 60's, but it wasn't until twenty years later that he began channeling spirits himself. He moved to Guatemala in the early 70's and started a farm which operates on principles akin to Rudolf Steiner's Biodynamics, but with a Mayan slant. He became involved with local Mayan priests because of Mayan calendar software he had written, which they had adopted; and he was given a ritual to invoke Mayan spirits himself.
Magic can be defined as the intentional manipulation of luck by means of the deliberate cultivation of intuition. Magic is not a matter of altered states of consciousness, or of ooga-booga rituals to invoke spirits (although it does involve such things). Rather, magic is a matter of liberating yourself from your social conditioning by learning how to operate on intent - direct knowing and acting; following your own heart - rather than by thought (subscribing to other people's belief systems). Thus magic can be considered a form of psychotherapy - of dehypnotizing and rehypnotizing yourself to release the obsessive fixation of everyday life.

You can find more about Bob Makransky on his site: www.dearbrutus.com

Bob has created interpretation reports for Tropical Lunar Mansion ingresses and for the fixed stars aspects.

He has also kindly agreed to publish several of his articles on our site:

3. On the Domification problem.